The Matsés, also known as Mayoruna, live along the Javari River and its tributaries in the remote region straddling the border of northeast Peru and Brazil. The Matsés historically avoided navigable rivers and maintained hostile relations with neighboring non-tribal Peruvians and Brazilians until 1969, when the Summer Institute of Linguistics missionaries contacted them. Since the late 1990s, acculturation of the Matsés to the national cultures has proceeded rapidly. Although most Matsés still meet all their nutritional needs through traditional subsistence activities including hunting, fishing, trapping, swidden horticulture, and collection of wild foods, their interactions and dependencies on the outside world are increasing rapidly.

Residence patterns: from semi-nomadic to sedentary. Traditionally the Matsés lived in large longhouses where up to 150 persons resided. Every few years, as their farms lost productivity and game animals became scarce and wary, a longhouse group would transition to a new area by planting a farm at the new home site (often crossing from Peru into Brazil and vice-versa). Once their crops were in production in the new area they would construct a new longhouse there. As they were at war with the non-Indian population, they never made their farms close to rivers or navigable streams. This semi-nomadic residence pattern had multiple benefits, including 1) minimal impact on flora and fauna; 2) hunters could obtain game easily and young hunters could practice their skills on unwary game; 3) no need for transport of crops from the farm; and 4) it facilitated the reconnaissance and defense of their territory. Today, the Matsés live in small nuclear family houses along rivers and large streams, and villages tend to be permanent. Currently the Matsés titled territory in Peru contains 18 Matsés villages, and no non-Indian settlements. The Matsés population is estimated at 2200 in Peru and 1300 in Brazil. 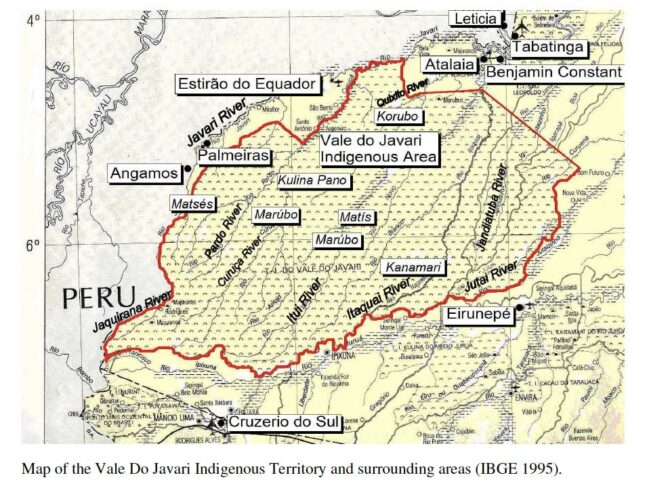 A kinship based society: almost all aspects of Matsés society revolves around their kinship system. Upon studying a list of residents of any Matsés villages, one quickly discovers that they are all closely related by blood and/or by marriage. Kinship is the glue that binds a village and the ethnic group, determines social interaction, and allows their society to live together in harmony without laws, punishments, or powerful authorities. For example, joking relationships and marriage partners are restricted to cross cousins, while parallel cousins are treated as siblings. The term “Matsés” literally means the people, and kinship is so important to them that they use different parts of speech depending on the speaker’s degree of relatedness to the subject.

The Matsés language: Matsés belongs to the Panoan language family, which includes the better-known Shipibo and Kashinawa. Matsés is one of the few languages in Peru that is still the first (and often only) language learned by the children. Levels of bilingualism with Spanish (or Portuguese in Brazil) are constantly increasing among the younger generation, but Matsés is still the every-day language in all the Matsés villages. Spanish and Portuguese, however, are prestige languages for the Matsés, and consequently the youth are beginning to mix these European languages into their speech, and the future vitality of the language is uncertain.

Subsistence strategies: The Matsés traditionally obtained their food by farming, hunting, fishing, and collecting wild foods (fruits, tubers, honey, etc.). Other than positions as school teachers, there are almost no jobs that allow a Matsés person to receive a salary while living in their territory, and there are no markets close enough to sell significant amounts of agricultural products. Consequently, most Matsés continue to obtain their food through these traditional strategies. The few changes include the almost complete switch from bows and arrows to 16-gauge shotguns, and the increase of fishing activities now that all villages are situated along the larger waterways.

Material culture: Matsés men are skilled bowyers, arrow smiths and basket weavers, and women are master weavers of bracelets, strainers, straps, hammocks, and other crafts. The most striking aspect of Matsés material culture is they can make all of these artefacts, and also their houses and watercraft, with nothing more than a machete and/or ax. It is a common notion that Western society is superior because of its more complex technology. Yet it can also be argued that the Matsés have the advantage of being essentially technologically independent, and their traditional technology allows them to live in harmony with their environment. Indeed, if a worldwide catastrophe occurred (likely caused by Western technology), the Matsés would be able to continue to live in their traditional manner without crisis. Today the Matsés are in the process of assimilating to Western society, and it is in their material culture where this change is most obvious: clothing, motorized boats, tin roofing, and even cell phones (despite the lack of phone service) are universal in all the villages. But the older Matses still possess the knowledge to live in the traditional way, and among our goals is to motivate intergenerational transmission of this knowledge.

Ornamentation: Although they are no longer used, the Matsés are still best known for their striking facial ornamentation, as can be seen in the photograph above. The palm veins inserted into piercings in the nostril flares (by women) or the upper lip (by men) are reminiscent of feline whiskers, and consequently have led to the Matsés being incorrectly called “cat people” or “people of the jaguar”. However, the Matsés insist that their facial ornamentation is not meant to imitate felines, but are simply used to identify them as members of the Matsés ethnic group and they object to these designations. Traditionally, the Matsés wore no clothing. Men and boys used penis strings (with which they tied their foreskins to their lower abdomen) and headbands, and men, women and children all used bracelets and anklets woven from spun cotton or palm fiber twine.

Traditional ecological knowledge: the Matsés equivalent of a PhD. Most outsiders view the Amazon jungle as a dangerous and hostile environment in which those without basic survival skills will suffer or perish. Yet the Matsés do not just survive, they thrive in their rainforest in comfort and heath, and they owe this to their traditional ecological knowledge of the forest and waterways, which turn these into storehouses of foods, medicines and materials for building dwellings, weapons, tools and ornaments. The comprehensive documentation of this knowledge would require an encyclopedia of many volumes, without taking into account the skills acquired through experience to find, identify and manipulate these resources effectively. As one example, by combining vegetative and geomorphological habitat designations, the Matsés can distinguish 178 different rainforest habitat types. Additionally, a good Matsés medicine man knows more than 1000 medicinal plants.

Since 2013, Acaté has been working directly through on-the-ground initiatives with the Matsés to assist them in maintaining their self-sufficiency and independence as they adapt to the outside world through core domains: sustainable economy, traditional medicine, cultural preservation, ecological protection, education and governance. Our on-the ground capacity-building initiatives that will help them maintain their self-sufficiency and traditional way of life, and at the same time allow them to defend their territory and rights as they interact with the outside world. Through these initiatives, the Matsés will be better able to resist the powerful external forces that threaten the environment they depend on for their survival and sustain their unique way of life. The initiatives bridge generations, inspiring youth that their identity as Matsés can lie in both traditional and modern systems. That to choose one is an artificial choice, one can thrive in the outside world, yet retain a proud identity as Matsés.

Learn more about Acaté’s programs to support the Matsés People in the following links and field reports:

Portraits of the Matsés: An Interview with Alicia Fox (December 2013)