The ancestral lands of the Matsés comprise an area of 3.7 million acres in Peru and contain among the most intact, biodiverse and carbon-rich forests in the world. Their communities safeguard and shield some of the last remaining uncontacted tribes living in isolation from unwanted encroachment by the outside world. With the accelerated rates of deforestation and fires in the Amazon Basin, this vast area of intact primary forest that generations of Matsés have fought to protect is of vital importance for their future and is of global significance.

In 2015, the Matsés and Acaté launched the landmark Matsés Indigenous Mapping Initiative. Before this initiative, the few maps of Matsés lands were those created by non-Matses that depict an empty landscape. A few scattered dots along the large rivers that represent their present-day settlements are the only indication of Matsés’ inhabitation. Only the largest rivers are named in Spanish. To the Matsés, the caretakers of these lands, the blank areas on these maps were not voids but the living heart of their territory.

At the start of this project the Matsés’ rich knowledge of their lands and ancestral history resided only in the memory of their living elders. The Matsés recognized the urgency to complete this initiative as the remaining elders were reaching an age where it is increasingly difficult to walk to remote cultural and historical sites. The loss of this knowledge would sever their timeless ancestral connection to their lands. 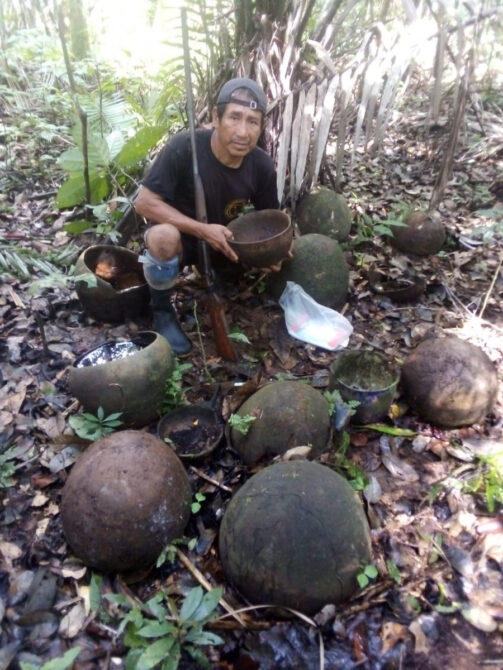 Ceramic pots mark the site of a longhouse in the far reaches of the upper Galvez river that was hastily abandoned following a skirmish with Peruvian soldiers over 70 years ago. Before the Matsés Indigenous Mapping Initiative, important ancestral sites such as this village resided only in the living memories of the elders©Acaté

With support from Acaté Amazon Conservation, the Matsés received training in basic computing and in the use of GPS units. In an undertaking of immense scale over five years, teams of Matsés, led by elders, traveled throughout their land and deep into their headwaters to record thousands of culturally important mapping points including locations of ancestral longhouses, sites of frontier skirmishes with Peruvian soldiers and areas of ecological importance. All of the waterways in their territory were recorded for the first time with their original Matsés names.

Computer literacy among the Matsés, as with other remote Amazonian tribes, is extremely low. Most of the participants had never opened up a laptop before the start of the project. The project began with basic computer usage training, followed by word processing and spreadsheet lessons. This capacitation for the project imparted a highly valuable skill set to the Matsés who participated, and in-turn could train others. Over time, classes advanced to use of the GIS (Geographic Information Systems) mapping software. 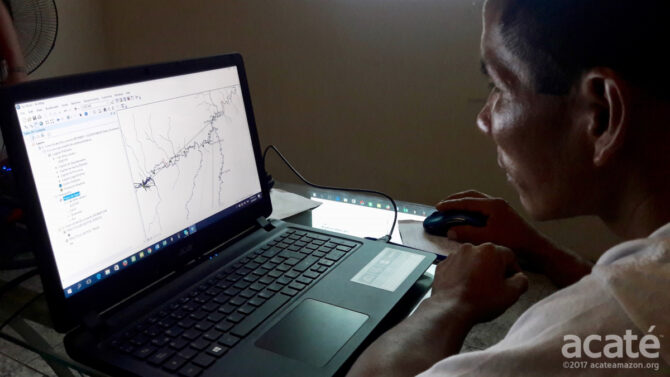 Through capaciting the Matsés with the ability to use the complex mapping software, the project took a major step forward from prior participatory mapping initiatives undertaken with other Amazonian indigenous groups. The ability to create and generate maps for themselves will give Matsés a powerful tool to use in governing their territory and protecting its resources. The intact rainforests that comprise the Matsés territory exist today because the Matsés have fought to protect them. For centuries, the Matsés have been locked in conflict with outsiders encroaching on their lands set on resource extraction, from the rubber barons of old to modern-day multinational petroleum corporations. The maps will be an instrumental tool for present and future generations of Matsés to protect their lands from extractive industry and future attempts to dispossess them.

In August 2019, on the 50th anniversary of sustained contact with the outside world, leaders of the Matsés tribe of the Peruvian Amazon assembled to unveil the first completed maps that demarcate their ancestral territories.