Sustaining the Amazon With Its Indigenous Peoples

Acaté brings much needed support to the struggling indigenous people of the Peruvian Amazon. We work directly in a true and transparent partnership with the Matsés indigenous people to support them while as they adapt to the rapidly changing world while maintaining their self-sufficiency and their cultural self-determination.

The Matsés people live in the headwaters of the Javari River, in what is now the present day border between northern Peru and Brazil in the heart of the Amazon rainforest. They are known as fierce warriors due to their defeat of the rubber tappers who invaded their territory and their long conflict with colonizers backed by the Peruvian military. Peaceful contact with the outside world began in 1969 when they accepted a meeting with missionaries. The Matsés still live by hunting, fishing and farming only now they live in family homes in permanent villages instead of in communal longhouses in temporary villages.

The Matsés have long safeguard one of the last frontiers on the planet, protecting a region of over 3 million acres in Perú alone of intact rainforest and shielding some of the last remaining uncontacted tribes in voluntary isolation from unwanted encroachment from the outside world. We operate through implementing strategic programs that help them protect their chosen way of life, traditions, their land, and ecology.

All of Acaté’s field projects are led, coordinated, and undertaken by the Matsés people themselves. Many of the serious environmental threats in remote indigenous areas that you hear about in the news—petroleum, timber, mining and the like—are external industries that opportunistically prey on the weakened internal social cohesion of recently contacted indigenous peoples, their limited resources, and increasing dependency on the outside world. The unifying theme of Acaté’s programmatic areas is self-sufficiency. Acaté did not predetermine these conservation priorities. They were set in discussions with the Matsés communities who know that the best way to protect their culture and lands is through a position of strength and independence.

The Amazon is the greatest rainforest on the Earth. It is a land of superlatives, where hyperbole falls short of eclipsing the reality of its grandeur and significance to human life. As vast as it is diverse, the Amazon is a repository for speciesone in every ten species on the planet and one fifth of the world’s fresh water that flows to the ocean. A few hectares of forest in certain regions of Peru may contain as many species of trees as found within the entire continental United States. The total biomass of carbon in the Amazon Basin is estimated at 86 gigatons of carbon. To place it in perspective, the annual CO2 emissions from the United States represent less than a tenth of a percent of this figure. The Amazon, the largest rainforest in the world, is the lungs of our planet.

Indigenous Peoples of the Amazon

Scientific studies confirm that indigenous peoples are extremely knowledgeable and responsible custodians of their environment. The Barasana Indians of Colombia can identify the tree species in their territory without referring to fruit or flowers, a feat unapproachable by any university-trained field botanist. A single Piaroa swidden field in the Venezuelan Orinoco may contain 40 distinct varieties of native manioc. The extent of forest knowledge and utilization by Amazonian tribal peoples is not restricted to the botanical kingdom: the Kayapó of central Brazil can recognize 56 species of stingless bees and can describe the particular qualities of each species’ flight pattern, nest construction and honey production.

Tribal peoples understand and value the rainforest because they are dependent upon it. This relationship extends beyond a utilitarian reliance; there is spiritual link to the forest, a sense of interconnectivity, difficult to comprehend through the compartmentalized Western mindset but one no less real. It is not a coincidence that the remaining tracts of pristine rainforest in the Neotropics overlap with areas of indigenous habitation. 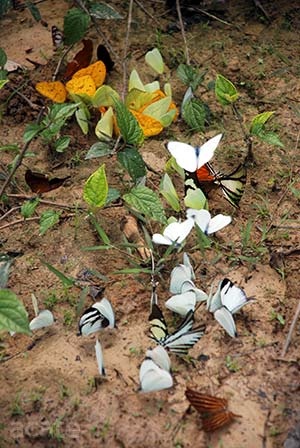 The fallout from contact with the outside world has rarely been anything less than catastrophic for indigenous people. By estimates, 95% of the population of indigenous peoples perished following the ‘discovery’ of the New World by Columbus. The extinction of untold hundreds of tribes and the horrors unleashed on the survivors has persisted over the centuries. For tribes that survived the devastation of introduced disease and conquest, the process of acculturation transformed once proud cultures into fragmented remnants. With their self-sufficiency, social cohesion and land-rights stripped away, tribes were left to struggle in a new world marked by poverty and external dependence. The Amerindian peoples that survived the devastation of European conquest and disease face enormous health, environmental and social challenges in the setting of limited extrinsic resources.

In the 21st century, a handful of tribes still live in its most remote reaches of the Amazonia and maintain fundamentally traditional ways of life. They do not seek to maintain a state of existence frozen in time, but to adapt and survive in a manner that ensures self-sufficiency and hope for the future of their people. These tribes struggle and face deep generational divides; cultural erosion, high rates of alcoholism, depression, suicide, lack of economic opportunities, lack of education, limited health care and suicide all plague their communities. The remote tribes of the Amazon are amongst the most marginalized peoples in the Western Hemisphere.

The Matsés inhabit the very heart of the Amazon Rainforest, an area of staggering natural beauty and almost inconceivable biodiversity, but a frontier deeply troubled and beset with threats. Their Ancestral Territory divided by the Javari River which defines the borders of northern Peru and Brazil. In Peru, the Matsés have title to a portion of their ancestral territory (Matsés Communal Reserve, CCN Matsés) and additional portion of their territory is contained within the Matsés National Reserve (Reserva Nacional Matsés), for which they have no legal title or governance. Across the river into Brazil, their Ancestral Territory lies within the Vale do Javari (Javari Valley) Indigenous Reserve, which also contains the largest number of uncontacted tribal groups in isolation remaining in the world.

All of our projects are centered on what the Matsés identified as their greatest needs when we formed Acaté. The Matsés have told us that they wish to adapt to a rapidly changing and shifting world and thrive, while not losing their identity and their proud legacy as a people. They wish to have good healthcare and education. They wish to retain titles to their ancestral lands and not have their forests destroyed and their headwaters poisoned by extractive industries. They wish to have real economic opportunities so that they can provide for their families. Safe jobs that do not entail destroying their environment or forcing them to leave their communities for the disillusionment of life in the cities and frontier towns. Like all of us, they hope, above all, to be able to provide a bright future for their children.

Our projects serve the Matsés, support and capacitate them for success in their dealings with the outside world, and to amplify their voice. Our programs include documenting the indigenous wisdom of plant medicine, piloting novel permaculture methods for sustainable and regenerative agricultural systems, mapping and demarcating for their first time their ancestral lands, finding ways to generate a dependable income using renewable non-timber resources to provide much needed economic opportunities for their communities and other critically needed projects.

Before Acaté’s initiatives, none of the remaining elder Matsés shamans had apprentices to pass on their ancestral knowledge of the rainforest accumulated over countless generations. Their entire ancestral healing knowledge was inarguably on the very precipice of extinction. Less than a decade later, the Matsés have created the historic first indigenous medicinal encyclopedia to worldwide attention and acclaim, wrote a second volume, and have restored Healing Forests in all of their communities in Peru. We are seeing young Matsés men and women, who constantly face racism and discrimination in their interactions with the outside world, emerge as leaders with a renewed pride in their culture and determination to carry on the proud legacy of their people.

At Acaté Amazon Conservation, we believe that the Amazon is an endowment to be protected and respected, not destroyed as our world is doing right now. We have spent the past two decade in partnerships with indigenous communities to help give them a larger voice in the struggle to survive these extractive industries.

Our programs involve documenting the indigenous wisdom of plant medicine, piloting permaculture methods for sustainable and regenerative agricultural systems, and finding ways to generate a dependable income using renewable non-timber resources to provide much needed economic opportunities for their communities.